This is Jackson, a 5 star dog, one of the most wonderful dogs the world has ever seen.  He is 12 years old, a long haired, dapple, miniature dachshund.

I had the privilege of taking him to the groomer recently to make him look even more spectacular.  All did not go as planned.

Jackson has been blessed with what I call “Muppet Paws.”  His legs and paws are fuzzy and somewhat hilarious, much as you would expect on a Muppet.  This is a trait I have always prized.

The groomer’s instructions were to bathe him and brush him, clip his nails, do other things with some glands too gross to mention here, and tell me when to pick him up.  I requested no haircut for him, just a brushing.  But apparently a haircut was what the groomer felt was needed and she clipped the hair around his legs, giving him a chicken leg appearance.  Until it grows out, no more Muppet paws for me to enjoy,

And a tummy rub only exhibits the shame.  Poor Jackson!

I don’t like it, but it’ll grow out.  But why did bad haircuts become breed standard for some dogs?  Not to mention the awfulness of docked ears and tails, which I consider even more barbaric than the bad taste shown by an awful haircut.  To show a dog in its best light at a dog show makes sense, but really, is this necessary to do so with such absurd looks? 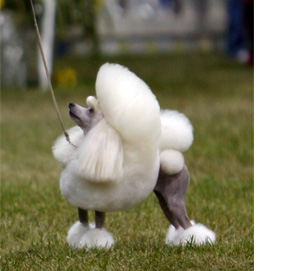 This is a wonderful intelligent dog.  If it wins the competition, in every picture it will have this haircut.  It will be immortalized just like this.  We are fortunate dogs don’t have a strong aesthetic sense.  Entire breeds would no longer be our best friends.