I walked into a vast basement warehouse in Phuket, Thailand in 2002 and was confronted with literally hundreds of oil paintings.  I didn’t really know what to expect when the man on the street invited me inside to see the hand painted reproductions.  At the time, I had no idea that reproductions were painted by hand, having assumed that all reproductions were prints and that the only hand painted reproductions would have been forgeries intended to deceive.  Yet these were paintings to hang in your home, and the prices were reasonable.  I assume the Thai artists were paid virtually nothing at all for their time.

Beyond my initial fascination with the few dozen artists all painting reproductions at the same time, I was confronted with a dilemma.  I was told that they could hand paint anything, from any book of art you could bring them (even a photograph), or from the many museum art books lying around the pace.

If you could own any piece of artwork (hand painted, but not original) from any time in history, what would you want to have hanging on your wall?

I immediately thought of some of the greatest or most enjoyable works.  The Mona Lisa, the Wall of the Sistine Chapel (I enjoy it more than the ceiling), Starry Night, etc.  Then I thought about it some more and decided that, though I loved to see these pieces, I didn’t want to look at the Mona Lisa everyday.  Sure, if it was THE Mona Lisa, I’d love to have it.  But I guess the reproduction, no matter how accurate to the original, would always be known to me as a reproduction.  Those weren’t Da Vinci’s paint strokes, that Michelangelo painting took 3 days to reproduce, not years, etc.  I would know, and I would always feel I owned a lesser work compared to any original.  As I started poring through the catalogs, I found incredible historic paintings, one after another, that I would never wish to own if they weren’t originals.

Should it matter?  I mean, is the appreciation of art dependent so strongly on who actually painted it instead of what was painted?  Seems pretty superficial to me.

But it did matter.  I wasn’t drawn to any particular piece except one of Warhol’s soup cans, and that was partly because Warhol made tongue-in-cheek art out of the ordinary.

It turned out that I couldn’t settle on anything at all for myself.  This led to a lot of soul searching on my part.  Sure, the reproductions were not 100% of the originals, but what if they were?  I decided I still didn’t want the Mona Lisa or Pieta, as I would rather support and own the real deal, no matter how unaffordable or impossible to acquire.

The Raft of the Medusa –  awesome!

But I have changed.  Now, over a decade later, I came across a piece in a book that I enjoyed so much, I decided I must have a copy.  It has been 15 years since I bought my last print, but this is not an everyday painting. Titled: Stranczyk during a ball at the court of Queen Bona in the face of the loss of Smolensk. 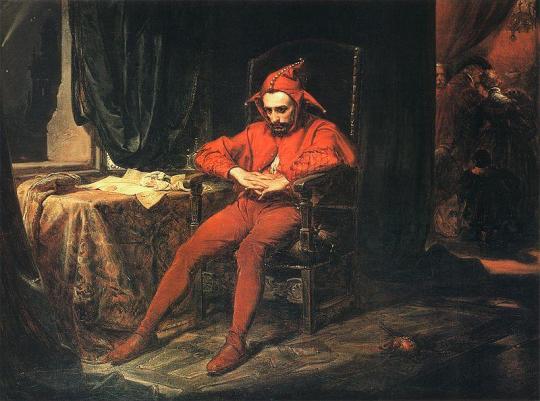 The quality of this small digital image is awful.  If you can, please take the time to see a better image.

Painted by Jan Matejko in the 19th century, it is a painting of the court jester Stanczyk in 1514.  In the background is the party as a very depressed Stanczyk considers the terrible Russian capture of Smolensk.  I read in wikipedia that Stanczyk was known to be an intelligent, philosophical, man who used his wit and powers of satire to comment on Poland’s past, present, and future.

The image of the depressed fool, contemplating and concerned by world events while sitting apart from the party, is fantastic.  One could speak of the interplay of colors, the bright chandelier in the background of the party, the portentous comet in the window, intertwined fingers and intense look of the jester, etc.  For whatever reason, this painting spoke to me before I noticed the finer details.  The closer I inspect it, the more those details add to my experience.   I would gladly own a copy and have it framed in it’s full glory on my wall.

“The true work of art is but a shadow of the divine perfection.”